Just as the Internet revolutionized the very idea of information, blockchain seems set to challenge and transform conventional notions of “value.” A lot of the technology’s success, however, depends on businesses’ understanding of its potential and applicability.

Blockchain, in many ways, appears to signify the dawn of a new era as it relates to the way we store and exchange value. In fact, it can be considered one of the biggest technology breakthroughs in recent history, similar to the advent of the Internet in the early 1990s. At that time, the Internet provided a new and more sophisticated way to search and share information, a way that was much more efficient and transparent.

Today, blockchain presents a similar value proposition and provides a way to transact in a secure, immutable, transparent, and auditable way. However, the understanding of the technology varies widely in terms of its potential and applicability. Through this primer, we aim to demystify blockchain and share our assessment of the current and future landscape, key drivers and impediments, potential applications, and considerations for companies.

A blockchain is a digital and distributed ledger of transactions, recorded and replicated in real time across a network of computers or nodes (figure 1). Every transaction must be cryptographically validated via a consensus mechanism executed by the nodes before being permanently added as a new “block” at the end of the “chain.” There is no need for a central authority to approve the transaction, which is why blockchain is sometimes referred to as a peer-to-peer trustless mechanism. Broadly, there are three levels of blockchain utilization1 (figure 2):

Storage of digital records: Blockchain can be used to store digital identities of individuals, organizations, assets, titles, voting rights, and essentially everything that can be represented digitally.

Recordation and execution of smart contracts: Simply put, smart contracts are digital codes that enable the automated execution of specified actions based on contractual conditions as validated by all the parties. Think of smart lease contracts, which enable automated rental payments, or smart loan contracts, which transfer the asset ownership in case of a default.2 In that way, smart contracts can not only auto-execute recurring business transactions but also potentially help to reduce contractual defaults. Smart contracts recorded in a blockchain are immutable, so high-quality code is required to avoid errors and fraud. 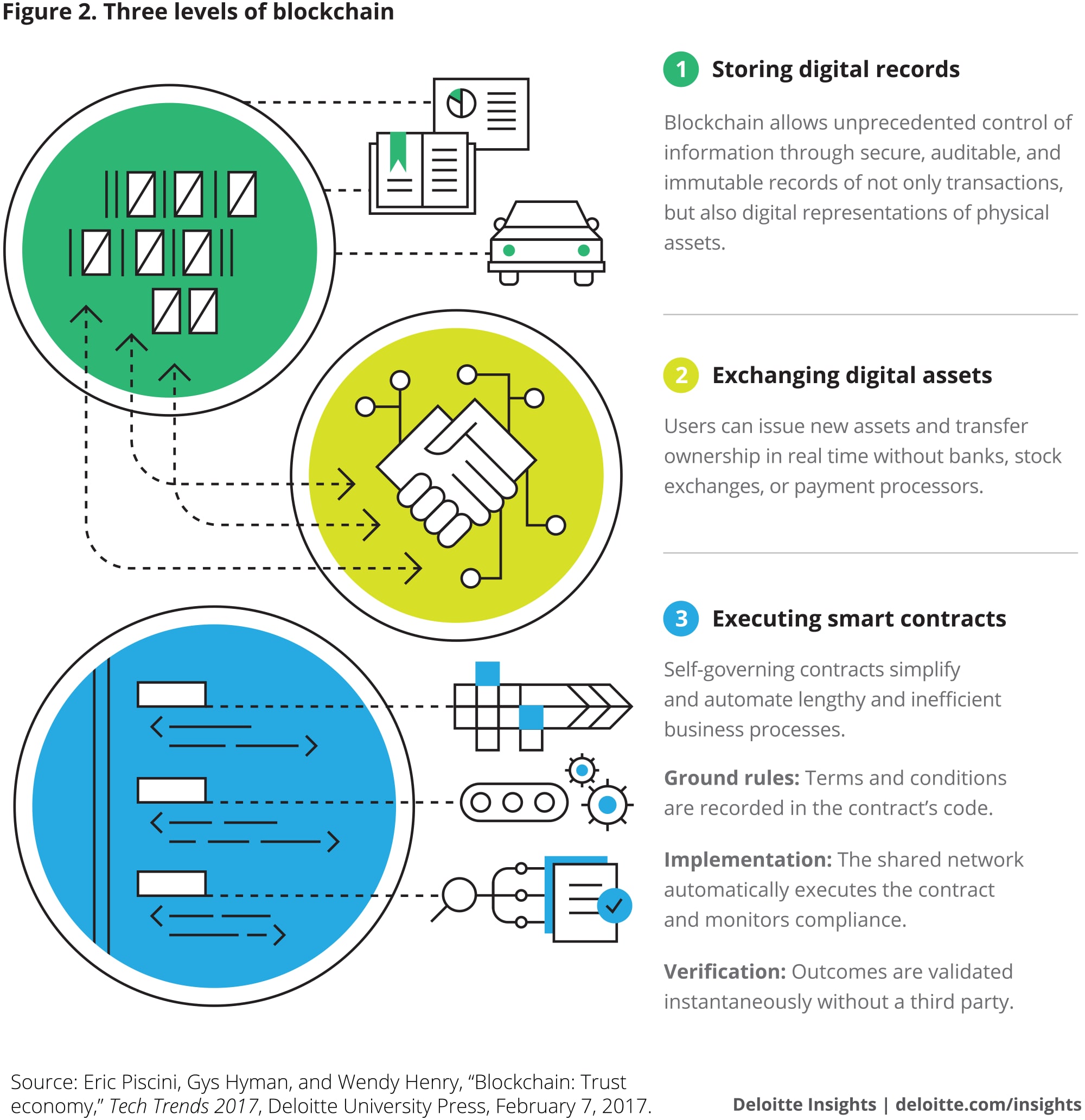 Blockchain’s ecosystem, like its technology, is rapidly evolving and we are witnessing the development of new platforms, applications, consortia, and partnerships. Many companies are collaborating with blockchain start-ups and some of the large players are even developing their own solutions and filing patents.3 In addition, most companies are opting to be a part of a consortium, which typically includes industry players, regulators, and governments.4 These groups typically support the development of decentralized business platforms and applications.

Prominent blockchain consortia include Enterprise Ethereum Alliance, R3, and Hyperledger, which provide open source platforms to enable cross-industry applications of blockchain, rather than just being limited to the cryptocurrency world.5 The number of projects based on these platforms has witnessed a sharp rise in the last few years. For instance, according to GitHub, a global software collaboration platform, Ethereum hosted 9,970 projects in mid-2017, compared to 1,439 projects in 2015 and starting from 3 projects in 2013.6

In terms of growth and market potential, most estimates project a robust growth rate for the blockchain market in the next few years. For instance, according to one estimate, the global blockchain technology market is expected to grow at a compounded annual growth rate (CAGR) of 62.1 percent between 2015 and 2025 to reach $16.3 billion.7 The potential in terms of business impact is even more optimistic. According to Gartner, “The business value-add of blockchain will grow to slightly more than $176 billion by 2025, and then it will exceed $3.1 trillion by 2030.”8

The growth of blockchain technology is driven by many factors, including:

While the above factors, among others, seem to be driving blockchain’s adoption, there are certainly some challenges that should be tackled to ensure wider and smooth adoption of the technology.

In addition to the above challenges, there are some key implementation considerations and questions that companies will likely need to address, such as technology, operations, talent, and compliance. For detailed insights on these and other technical challenges, please refer to Deloitte’s recent report, Taking blockchain live.

For further insights on blockchain, please refer to the other publications on Deloitte Insights, including Blockchain: Democratized trust and Blockchain to blockchains: Broad adoption and integration enter the realm of the possible.

The general perception of blockchain is that the technology is primarily applicable to the financial services industry. Of course, much of this perhaps comes from more popular use cases in the cryptocurrencies and payments space as FSIs have been the early adopters. In reality, blockchain has applications across several other industries (table 1), which seem to be gradually realizing the technology’s potential.

Most financial services companies have been involved in blockchain via their labs, investments, and pilots for a while now. Other industries are now starting to realize the potential for disruption, as well as the new opportunities that blockchain creates.16 — Eric Piscini, principal, Deloitte Consulting LLP and global financial services blockchain leader Why should companies care?

Blockchain as a technology seems too valuable to be ignored. While process efficiencies and better security are key benefits that are being targeted, perhaps the real value proposition and potential lies in the new revenue and solutions that could be enabled by the technology. Indeed, according to the Deloitte survey, 24 percent of executives believe that blockchain can facilitate new business models and more than two-fifths of the respondents who know blockchain expect it to disrupt their industries.29

However, as highlighted earlier, many senior executives are not well informed. This makes a strong case for everyone to understand the fundamentals of blockchain and how it applies to their respective industries.

In addition, because blockchain can be particularly advantageous when business partners exchange value, business consortia are important to increase adoption. As examples, B3i and HKMA are industry-led consortia getting business partners to collaborate on new reinsurance and trade finance platforms.

Joining consortia can be a good way to know the latest trends and be part of the technology’s evolution. In addition, companies should coordinate with their key stakeholders, including customers, suppliers, and business partners, as the benefits of blockchain could be enhanced if they are on board as well.

Having said that, blockchain is certainly not the magic potion for all cost- and efficiency-related issues and businesses should carefully assess the technology’s applicability and feasibility to different processes. In fact, cryptography-based trust models could bring new and unforeseen risks, so companies would need to consider appropriate changes in their risk management strategy and governance models.30

It could take a few years before we see wide commercialization of blockchain platforms and applications. While many challenges may remain, from lack of regulatory and legal frameworks to rapid technology changes, from talent gaps to consortium building, it is important to not underestimate the impact of blockchain. Every transaction platform and fabric that we know today will likely be either improved or replaced by a blockchain-based solution. Engage now to build your future on blockchain or wait for others to create the future you will likely have to join.